Being the good Canadians we are, my husband Mike and I suffer from the occasional bout of Tim Hortons withdrawal.

For those readers who are unfamiliar with the institution that is Tim Hortons, allow me to educate you: Tim Hortons is the largest fast-food chain in Canada and it specializes in doughnuts, coffee and sandwiches. It was founded by Canadian NHL hockey player Tim Horton in the 1960s and there is a Tim Hortons in virtually every Canadian city, post-secondary campus, airport, community sports complex and corner gas station.  It’s known as Tims, Timmie’s, or Timmy Ho’s, in various communities. Their ‘Rrrroll up the Rrrrim to Win!’, ‘Camp Day’, Double-Doubles, Timbits doughnuts and the Timbits hockey teams (both of my nephews have started their hockey careers as Timbits, as well as NHL superstar Sidney Crosby), and their many other marketing tie-ins are extremely popular throughout my home and native land.

My Grandpa goes to the Tim Hortons in Olds, AB almost every day to visit with whoever’s there. My father-in-law makes daily runs into the Stettler, AB Tims for his large, black coffee. When we visit them, he often brings me back a small pack of Timbits, which I have to hide from the dogs. The chocolate ones are my favorite. Friends of mine swear the ultimate hangover cure is a large order of Tim Hortons chicken noodle soup and Mike has a soft spot for their iced-cappuccinos, no matter the outdoor temperature. I’ve often picked up coffee and snacks for my friends and coworkers as fuel during report card time, and almost every staff meeting or potluck lunch includes a box of Tim Hortons doughnuts.

So you can see how we would miss it occasionally.

In the winter, Mike and I would often pick up two sausage breakfast sandwiches, hashbrowns and orange juices on our way out to the cross country ski trails. Admittedly, not the most healthy pre-skiing breakfast, but it always hit the spot and gave us motivation to ski harder to burn it off.

The snow is scarce here in Le Plessis-Robinson, France and so are the fast-food places, which is actually a really good thing. But not when you’re missing a taste of home.

So we created our own, Homemade Tim Hortons Breakfast Sandwich and now you can too. 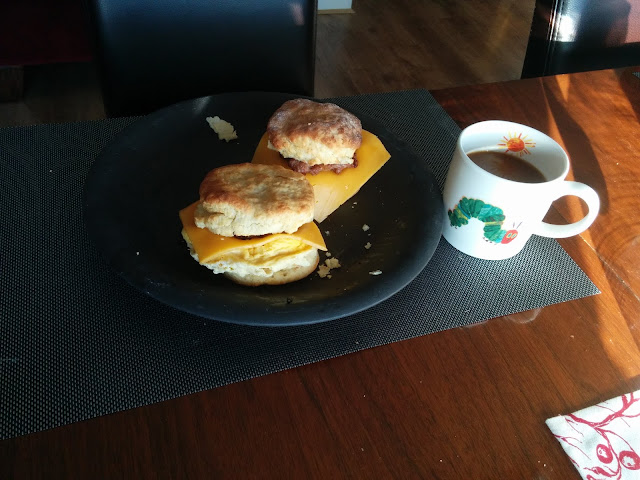 -Half a pack of ground pork
-1/2 teaspoon each of paprika and cayenne pepper
-Cheddar cheese slices
-Eggs (1 per sandwich)
-Homemade dinner biscuits, which I made using butter instead of shortening, from this good recipe 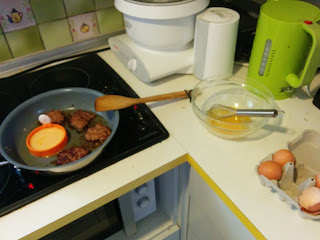 1-Mix the paprika and cayenne pepper in with ground pork.

2-Shape the pork into small patties and grill on a hot skillet.

3-Make the biscuit dough and cook them for 13-15 minutes, as per the recipe. For a convection oven, set the initial time for 10 minutes and check them periodically to avoid burning. Allow them to cool a few minutes before assembling the sandwiches. 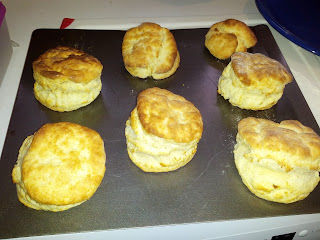 4-Whisk the eggs individually and pour each egg into a small, greased, microwave safe dish.

5-Microwave the egg on a low setting, and check/pause it regularly to prevent mess and overcooking. Or cook them in the pork grease, if that’s what you fancy.

6-Slice the cooled biscuits in half and assemble the sandwich. Our order was egg, cheese, meat, top.

7-Pour yourself a Double-Double or a glass of orange juice and enjoy.

The result for us was a welcome taste of Canada on a balmy, French winter day.

I’ll leave you to your sandwich making now, along with one of my favorite Tim Hortons commercials, featuring Sid the Kid himself and a nation of hockey-crazed Canadian folks.